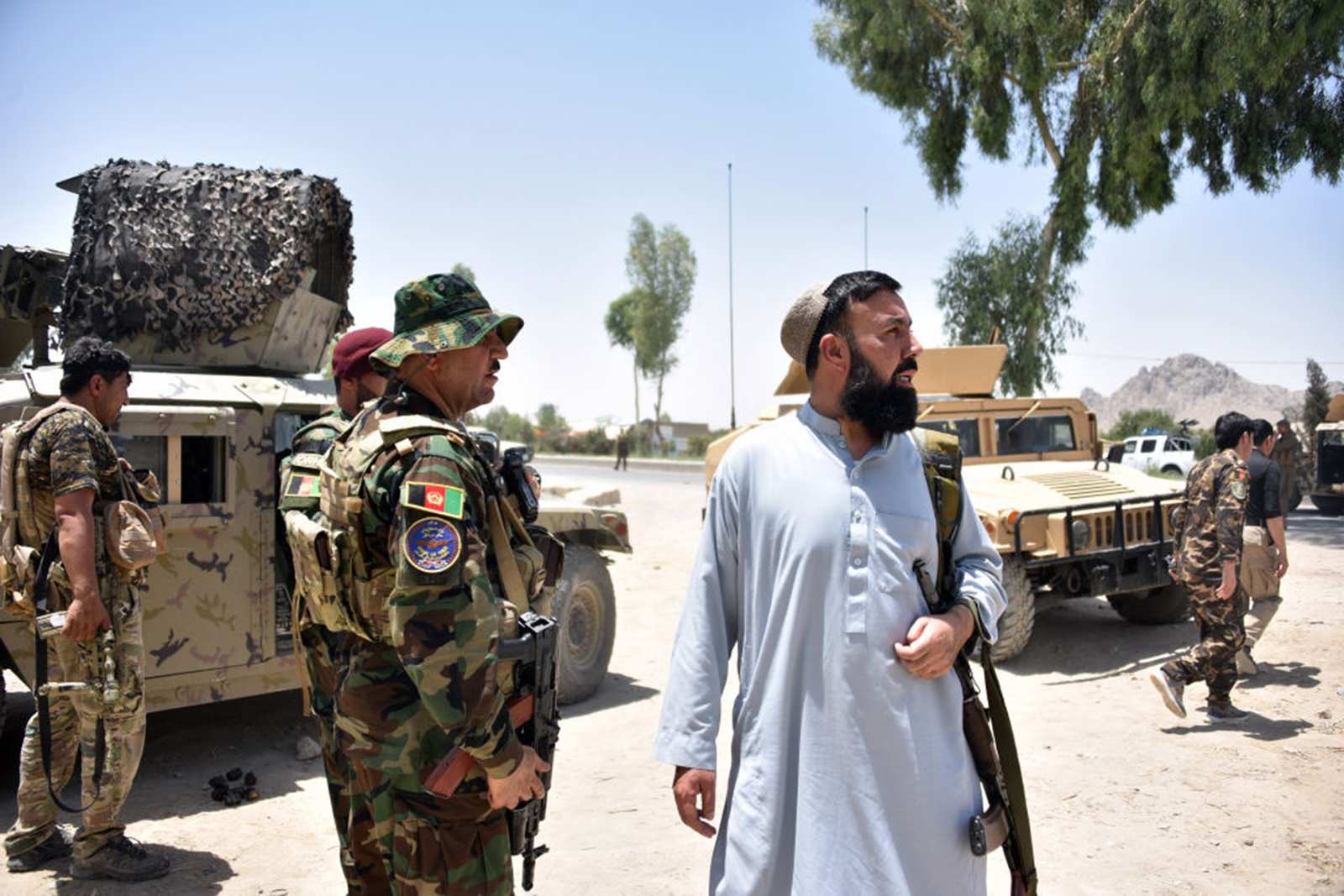 The Taliban’s lightning-fast advance to control more territory in Afghanistan is raising alarms from Russia to China, as U.S. President Joe Biden’s move to withdraw troops disrupts a balance of power in South Asia that has held steady for about two decades.

At least 1,000 Afghan troops this week retreated into Tajikistan, prompting the country mobilize an extra 20,000 soldiers to guard its frontier. Russian President Vladimir Putin’s sought out assurances from the Taliban that it will respect the borders of Central Asian states that once were part of the Soviet Union, while neighboring Pakistan has said it won’t open its borders to refugees.

Chinese Foreign Minister Wang Yi, who warned last week that the most pressing task in Afghanistan was “to maintain stability and prevent war and chaos,” plans to travel to Central Asia next week for talks on the country. Wang Wenbin, a spokesman for the ministry, on Friday called the U.S. withdrawal “hasty” and said Washington must honor its commitments to “prevent Afghanistan becoming once again a haven for terrorism.”

“The U.S. has rushed to withdraw its troops from Afghanistan and left the Afghan people in a mess, which further exposes the hypocrisy behind the pretext of defending democracy and human rights,” Wang Wenbin said at a briefing in Beijing.

Biden on Thursday had insisted the U.S. military had achieved its goals in Afghanistan and would leave by Aug. 31, just shy of its 20-year anniversary after the deaths of 2,448 U.S. service members and about $1 trillion in spending. Yet the battle will go on for the people in Afghanistan and surrounding countries, threatening in particular the $60 billion in projects in the China-Pakistan Economic Corridor (CPEC) right next door.

“The chaos in Afghanistan could spill over into other countries and lead to regional turbulence,” said Fan Hongda, professor at the Middle East Studies Institute of the Shanghai International Studies University. “China does not want to take over the U.S. role, but hopes to facilitate regional peace and stability because it has interests in the region.”

The Taliban have dramatically expanded their hold on Afghan territory in recent months, leaving the U.S.-backed government in control of little more than 20% of the country, according to data compiled by the Long War Journal. The insurgent group now holds 204 of 407 districts, up from 73 at the beginning of May, while the Afghan government only controls 74 currently. The rest are contested.

At the moment, authorities in Kabul still control all of the 34 provincial capitals, although two of them near the borders of China, Pakistan, Tajikistan and Turkmenistan are now being contested. The Afghan Defense Ministry has stepped up airstrikes against Taliban fighters in recent weeks.

The Taliban’s swift rise after fighting the U.S. for 20 years risks leading to a collapse of the Afghan government and military, a scenario that last took place in the 1990s after the Soviet Union withdrew. While the U.S. seeks to prevent al-Qaeda from regaining a foothold in Afghanistan, the implications are dire for the six countries bordering the country — as well as nearby nations like India that have frequently been the target of Jihadist attacks.

The risks of regional contagion were made clear in April when a car bomb exploded at a luxury hotel hosting the Chinese ambassador in the Pakistani city of Quetta, not far from Taliban strongholds in southern Afghanistan. The attack, claimed by the loosely affiliated Tehrik-i-Taliban Pakistan (TTP), showed that governments in the region might struggle to protect high-profile diplomats and business people.

“The Taliban has close links with as many as 20 terror groups who operate across the region from Russia to India,” said Farid Mamundzay, Afghanistan’s ambassador to India. “Their activities are already visible on the ground and they pose a significant threat to the region.”

Pakistan, which helped the Taliban rise to power in the 1990s, is now worried about a resurgence of the TTP, a group that has been blamed for 70,000 deaths of civilians in the country since the U.S. invasion of Afghanistan in 2001. Only recently crushed by a combination of Pakistan military operations and U.S. drone strikes, the TTP may see an opportunity to attack Chinese projects to influence policy in Islamabad.

“These groups want to hurt Pakistan, and these attacks hurt the most,” said Asfandyar Mir, a postdoctoral fellow at the Center for International Security and Cooperation at Stanford University. “The situation in Afghanistan is an important factor for the security of CPEC.”

With an economy that has grown by about five times since the U.S. invasion of Afghanistan, China is a particularly ripe target. Showing the importance of the relationship between Beijing and Islamabad, Pakistan’s army has raised a dedicated force of thousands to protect CPEC projects across the country.

A Taliban-led Afghanistan would likely solidify relations between China and Pakistan on one side and the U.S. and India on the other, with Russia and Iran in the middle to adjust policies depending on the threat perception, according to Gautam Mukhopadhaya, a former Indian ambassador in Afghanistan, Syria and Myanmar.

“The region will be severely impacted, but the rest of the world will not be immune to the shifts in geo-political balance, extremism and violence,” said Mukhopadhaya, currently a senior visiting fellow at the Centre for Policy Research, a think tank based in New Delhi.

As the Taliban makes gains, many Afghans are fleeing villages for the relative safety of bigger cities. Pakistan expects 500,000 refugees from Afghanistan, and authorities have said they’ll be kept in border camps. More than 1.4 million registered Afghan refugees are already in Pakistan, according to the United Nations High Commissioner for Refugees.

A win for the Taliban would ultimately embolden all sympathizers across the region, said Madiha Afzal, a non-resident fellow at Washington-based Brookings Institution.

“Foot soldiers of these groups also cross over from one to the other,” she said. “They see the U.S. withdrawal and the Taliban’s position as a victory for jihadists.”