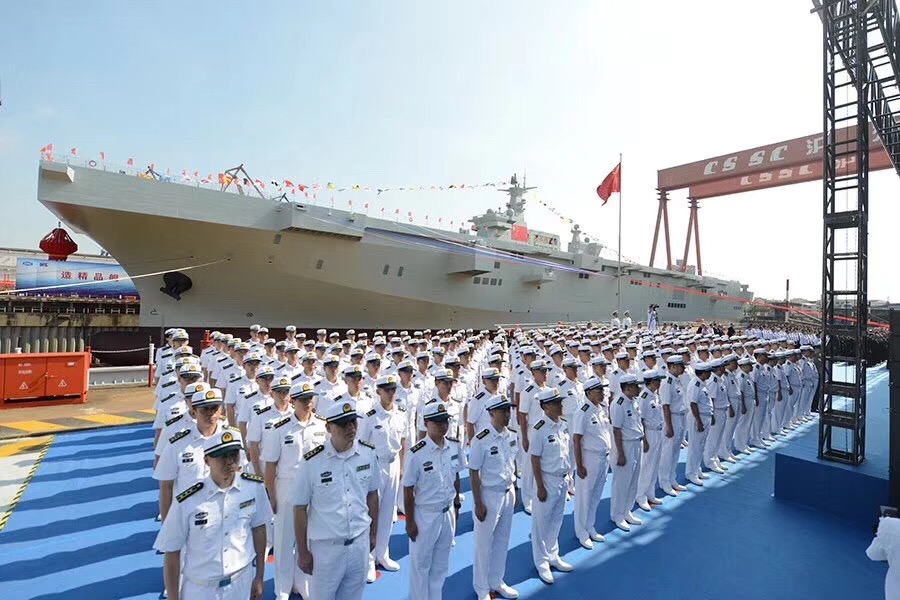 China’s Navy is conducting previously unreported tests on experimental armed “mini-destroyer” drone ships at a secret naval base on the nation’s northern coast, according to United States Naval Institute (USNI) News on Monday.

The People’s Liberation Army Navy is testing secretive naval programs at the pier near Dalian, including two “large uncrewed surface vessels,” (USV) which were detected in Maxar Technologies satellite photos reviewed by USNI.

And two previously unreported USVs too. One is like JARI but much bigger https://t.co/TLr33XMWne

The photos also showed that construction of the secret pier was completed in 2017 and has been periodically used by China’s Army. The facility resembles a very basic military base, and when it is in use, two large work barges are moored to give crews and support staff additional facilities. USNI wrote that the combination indicates it is an “auxiliary facility” for “short-term trials and exercises.”

#Chinese Testing Experimental Armed Drone Ships at Secret Naval Base#China is testing its large uncrewed surface vessels (USVs) in a pier near Dalian, according to satellite photos given to USNI News by Maxar and an analysis of open-source intelligence.https://t.co/vdLGQm32rT pic.twitter.com/HPQMJhRecd

Submarines have also been spotted at the secret pier, and one Type-035 Ming Class boat was also observed executing ballast tests, the photos provided to USNI showed. The institute speculated that the pier “may be used as overspill for the nearby Xiaopingdao naval base.”

The new base is far from main naval bases, making it ideal for testing the experimental armed drone ships because it gives service members more room to operate. It is still only a mile from a civilian yacht arena where the USV known as the JARI was seen in 2020. The JARI is similar to the USVs observed at the secret pier.

According to USNI, the JARI was first revealed as a model in 2018. China executed sea trials of the unmanned ship two years later. The JARI, which could be named in reference to the Jiangsu Automation Research Institute, is a 50 foot-long watercraft that has been “described as a mini-destroyer” due to its weapons and sensor fit.

“With a remote weapons station (RWS), it is intended to be armed with a small vertical launch system (VLS) for surface to air missiles and two lightweight torpedo tubes,” USNI explained. “Sensors include phased-array radars, electro-optical devices and sonar.”

The unreported vessels seen at the secret pier are similar to JARI, USNI stated. They have a similar structure and appear to include torpedo tube openings on each side. At approximately 70 feet long, the new USVs, however, are much bigger than the JARI. USNI described the vessel’s superstructure as being “generally more substantial.”

“Most leading powers are testing unmanned naval technology, but China has only revealed some of its programs,” USNI noted. “The two observed at the pier are generally larger and more robust. This points to the fast pace of Chinese research and development.”