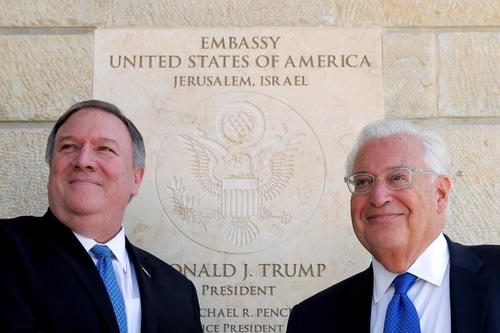 Israel Blasts Biden Plan To Open US Consulate For Palestinians In Jerusalem: “No Way We’d Agree”

Israel Blasts Biden Plan To Open US Consulate For Palestinians In Jerusalem: “No Way We’d Agree”

The Biden administration is planning to open a consulate dedicated to Palestinian affairs in Jerusalem in a significant break from Trump’s policy of only recognizing a diplomatic presence to Israel, resulting in severe pushback this week from top Israeli officials. Former Trump admin officials have called the proposal “illegal” under international law, given they argue that Palestine is in no way a state that has any formal recognition.

“No way would Israel agree to have the United States reopen its consulate dedicated to Palestinian affairs in Jerusalem, said Israeli Justice Minister Gideon Saar,” The Washington Post reports Tuesday. “His comment comes ahead of a meeting between the two countries’ top diplomats in Washington this week, with the topic likely to be on the agenda.”

The remarks at a public conference Tuesday clearly had the enthusiastic support of the crowd, which clapped during the multiple moments he slammed the Biden administration stance.

“I spoke with [Israeli Prime Minister Naftali Bennett] a couple of times on the issue. We are on the same page, and we don’t see differently,” Saar noted. “Someone said it’s an electoral commitment. But for us, it’s a generation’s commitment. We will not compromise on this.”

The reference was to Trump’s policy, which saw the historic and provocative (to the Palestinian side) transfer of the US embassy from Tel Aviv to Jerusalem, despite all international embassies being located in Tel Aviv. This was part of the new recognition of Jerusalem as the Israeli capital in 2017. The Palestinians saw it as the effective death of any future two state solution, and in contradiction of prior US administrations.

As The Washington Post recalled, “Secretary of State Antony Blinken said in May that the United States would reopen the Jerusalem consulate that traditionally engaged with Palestinians, but observers say the issue presents a dilemma for the Biden White House.” Biden had considered it a crucial way to heal relations with the Palestinian Authority following years of humiliation and being cast aside by the Trump White House.

Local Palestinians typically saw the consular presence as their only way of directly engaging with the State Department, or notifying or lobbying the US on crucial issues affecting the Palestinian population.

The re-opening of the US Consulate in East Jerusalem for Palestinian affairs was one of the Biden Administration’s top priorities as it worked to repair damaged US-Palestinian relations. It appears, Israel will likely snub the US’ request. https://t.co/RoCjHjz0wy

However, former US Secretary of State Mike Pompeo was quick to chime in at the same conference hosted by The Jerusalem Post, blasting it as “a terrible idea.” He suggested it represents the “false principle that Israel is an ‘illegal occupier’ and called on Israel to confront that narrative, which he said is the beating heart of modern antisemitism and dubbed the “lie of occupation,” according to the JPost.

“Occupation is a legal term whose definition does not apply to the State of Israel under the law.” Pompeo was generally discussing the Boycott, Divestment, and Sanctions (BDS) ideology adhered to by many US Progressives, including members of ‘the Squad’.

That’s when he specifically mentioned the proposed US consulate for Palestinians in Jerusalem as “a terrible idea for the United States, Israel and the Palestinian people.” He called it “illegal” – adding that “a US-recognized nation such as Israel should not host a consulate in the same city where a US Embassy is located,” according to JPost.