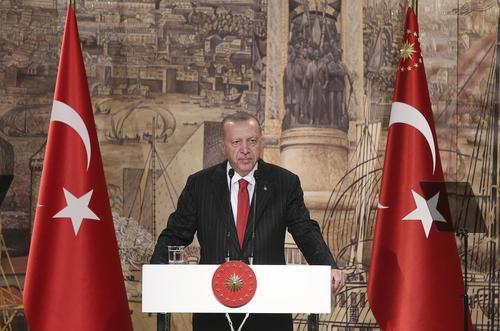 The pledge of what appears to be a coming military operation along the Syrian border area comes after reports of two Turkish police officers killed and multiple more wounded in Azaz in northern Syria, according to an Interior Ministry press release Sunday. “We have run out of patience,” Erdogan told reporters. “Turkey is determined to eliminate threats arising from northern Syria, either together with forces active there, or with our own means.”

“The latest attack on our police and the harassment that targets our soil are the final straw,” Erdogan said. Turkey considers Syria’s Kurdish YPG an offshoot of the PKK – long dubbed a “terrorist” group that Ankara has for decades attempted to eradicate.

According Al Jazeera, citing Turkish officials, the police deaths were accompanied by rocket fire from Syrian Kurdish positions onto towns inside Turkey:

Turkey is being fought in Syria’s north by both the US-backed Syrian Kurds and the Assad government, given Turkish national forces as well as anti-Assad jihadist groups supported by Turkey have annexed broad swathes of northern Syria territory along the border. Pro-Turkish forces have also over the years come under attack by Russian warplanes, creating lasting tensions between Ankara and the Kremlin.

The Syrian and Russian governments have charged Turkey with severe and continued violations of Syria’s sovereignty and acts of aggression, and there’ve been recent rumors that the Syrian Army is preparing for an assault of al-Qaeda occupied Idlib province. It’s long been an open secret that Turkey is propping up the terror enclave.

Turkey has sought to justify its military occupation as based in “defensive” ‘counter-terrorism’ operations in accord with Article 51 of the United Nations Charter. Hence it continually claims to be under attack by Syrian Kurdish militias in the region, for which it had initially launched ‘Operation Euphrates Shield in August 2016.