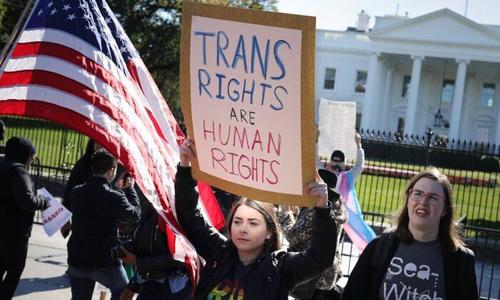 Authored by Matthew Vadum via The Epoch Times (emphasis ours),

L.G.B.T. activists from the National Center for Transgender Equality rally in front of the White House in Washington on Oct. 22, 2018. (Chip Somodevilla/Getty Images)

Gender identity is a disputed concept. A lack of linguistic clarity has clouded the issue in recent years as the concepts of sex and sexual identity, or gender, a politically and scientifically contentious concept whose definition isn’t universally agreed upon, have become difficult to separate. Despite the distinct meanings of the two words, many institutions and individuals use “gender” to mean biological sex, especially on fillable forms and documents.

Failing to use gender in its new meaning can be costly nowadays.

A New York human rights law banning gender identity discrimination imposes fines of up to $250,000 for failing to use a person’s preferred personal pronouns.

Social media giant Twitter bans users for “misgendering” or “deadnaming” transgender people, categorizing it as harassment and abuse. Deadnaming is referring to people by names they used before they changed their gender identity—for example, calling Caitlyn Jenner by that person’s birth name, Bruce Jenner.

Facebook reportedly recognizes at least 58 genders, allowing users to select which gender to use in their profile self-descriptions. Among them are Androgynous, Bigender, Cisgender, Gender Fluid, Genderqueer, Non-binary, Pangender, Trans, and Two-Spirit.

But in a rare legal defeat for the transgenderism movement, a ruling by the Court of Appeal of the State of California, 3rd Appellate District, sided with First Amendment speech protections over activists. The ruling by the three-judge panel was unanimous.

The court decision affects the Lesbian, Gay, Bisexual, and Transgender (LGBT) Long-Term Care Facility Residents’ Bill of Rights, which the California Legislature added to the state’s Health and Safety Code in 2017.

Wiener said he had received reports of LGBT seniors being mistreated.

“We have a number of advocacy organizations that are very excited about the bill, that helped us get it passed, and they are definitely putting the word out that people living in long-term care facilities have these protections and should be aware of them,” he said.

Health and Safety Code section 1439.51, subdivision (a)(5), “prohibits staff members of long-term care facilities from willfully and repeatedly referring to a facility resident by other than the resident’s preferred name or pronoun when clearly informed of the name and pronoun,” according to court documents.

Taking Offense challenged that provision, arguing that it violates care facility staff members’ rights to free speech, free exercise of religion, and freedoms of thought and belief, and is vague and overbroad.

The court said it “recognized the Legislature’s legitimate and laudable goal of rooting out discrimination against LGBT residents of long-term care facilities,” but stated that “we agree with Taking Offense that … the pronoun provision, is a content-based restriction of speech that does not survive strict scrutiny.”

“The pronoun provision—whether enforced through criminal or civil penalties—is overinclusive in that it restricts more speech than is necessary to achieve the government’s compelling interest in eliminating discrimination, including harassment, on the basis of sex. Rather than prohibiting conduct and speech amounting to actionable harassment or discrimination as those terms are legally defined, the law criminalizes even occasional, isolated, off-hand instances of willful misgendering—provided there has been at least one prior instance—without requiring that such occasional instances of misgendering amount to harassing or discriminatory conduct.

“Using the workplace context as an analogy, the statute prohibits the kind of isolated remarks not sufficiently severe or pervasive to create an objectively hostile work environment.

In this case, the attorney general “has not shown that criminalizing occasional, off-hand, or isolated instances of misgendering, that need not occur in the resident’s presence and need not have a harassing or discriminatory effect on the resident’s treatment or access to care, is necessary to advance that goal.”

The Epoch Times requested comment from California’s attorney general, Rob Bonta, a Democrat, over the weekend, but didn’t receive a reply by press time.