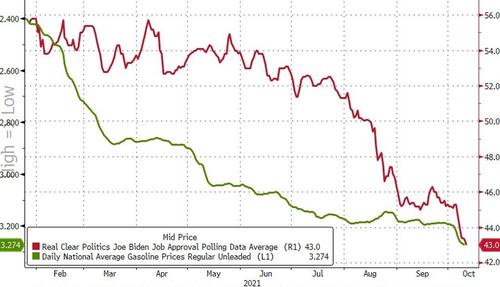 Having failed to stem the tide of soaring ‘flation’ in everything we eat and now the cost of heating/driving, Reuters reports that The White House is once again reiterating – likely in a strongly worded email – its urging of OPEC+ to increase crude production.

White House officials say “they are using every tool to address anti-competitive practices in US and global energy markets.”

They have raised the concern at a senior level with several members of the OPEC+ alliance, according to the official.

Well if that is true, they are failing miserably (and what would Greta and AOC say about demanding more fossil fuel output?)

One thing of note, why doesn’t the Biden admin unleash another executive order demanding that US crude producers ramp up their production? (intervening in free markets for energy has been going so well so far)…

As a reminder, President Biden said he was calling on OPEC to boost oil output (to implicitly cut prices of crude and thus gasoline) on August 11th. Then followed up with a threat to release the SPR on Oct 7th…

Things have gone just a little bit turbo from then.

Increased gas prices at the pump are already baked in for the next few weeks, given where crude and wholesales gasoline prices have moved recently…

The fact is the last time they mentioned this, oil prices did stumble. This time, not even a dip.

Could it be possible that OPEC just doesn’t care what the Biden admin wants?

As respected energy market (and geopolitical) observe Daniel Yergin told Bloomberg this morning, “the Biden admin doesn’t have many tools on energy prices.”

It does have plenty of tools though.