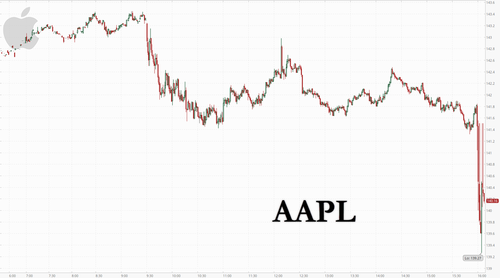 So much for all those lofty production forecasts…

Hours after Apple announced the date of its next major product event, Bloomberg is reporting that Apple is likely being forced to slash production targets for the iPhone 13 by as many as 10MM units due to “prolonged chip shortages,” according to Bloomberg’s sources.

Per BBG, Apple was previously expected to produce 90MM new iPhones during the last three months of this year, but it’s now telling its subcontractors and manufacturing partners the total will be lower because Broadcom and Texas Instruments are struggling to deliver enough component chips.

…taking the rest of the market with it.

Apple is one of the world’s largest buyers of chips, and its production needs typically set the tone for the global tech supply chain. But it’s already having trouble sourcing enough chips to meet its holiday production target.

Here are some key takeaways from the Bloomberg report:

Apple gets display parts from Texas Instruments, while Broadcom is its longtime supplier of wireless components.
One of the TI chips in short supply for the latest iPhones is needed to power the OLED display.
Apple also is facing component shortages from other suppliers, it’s not just TI and Broadcom.
The shortages have already hampered Apple’s capacity to ship new models to customers who have already placed orders, since the iPhone 13 Pro and iPhone 13 Pro Max went on sale in September.
Unfortunately, orders won’t be delivered from Apple’s website for about a month. And the new devices are listed as “currently unavailable” for pickup at many retailers.
Current orders are slated to ship around mid-November, so Apple could still get the phones to consumers in time for the crucial holiday season. Previously, Apple has said that this year-end quarter is expected to see its biggest sales blitz yet, with the company hoping to generate $120 billion in sales, what would be a 7% increase from a year earlier (and more money than Apple made in an entire year a decade ago).

Earlier on Tuesday, Bloomberg published a story examining Apple’s fraying relationship with the CCP. China has always been a critical growth market for Apple, and CEO Tim Cook has long won praise from the press and his peers for his ability to balance his relationships in China with priorities in the US, especially during an age of contentious issues like Beijing’s crackdown on Hong Kong and the outbreak of the COVID pandemic. Last month, China granted citizens the right to sue Apple for abusing its market power. Now, “Xi’s campaign threatens a delicate balance Apple has cultivated in China.”

The takeaway from all this: Despite its dominance in the global consumer-tech hierarchy, Apple isn’t immune to the supply chain woes afflicting the entire global economy.